Amazon Driver Rescues Senior Husky From Near Drowning In Pool 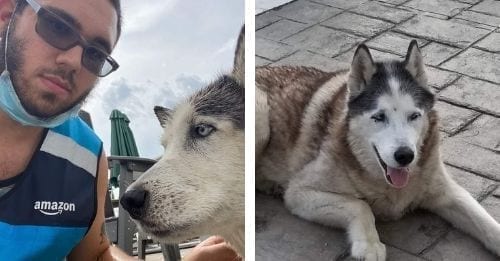 An Amazon delivery driver named John Cassabria stumbled upon a shocking sight during one of his scheduled deliveries. While walking to the front door to drop off a package as usual, he saw a commotion coming from the deep end of their pool. Once he saw what looked like a snout, his heart sank.

Once John realized the splashing in the pool was coming from a dog in distress, he immediately jumped into action. Without hesitation, he jumped into the pool after the drowning pup, not even thinking about his phone and other belongings in his pockets.

“I thought only of the dog at the moment.” John Cassabria

As John jumped into the deep end, the frantic pup, Luka, was barely bobbing above water. John’s rescue came just in time, as he was clearly exhausted from his time spent trying to stay above water.

After pulling Luka from the water, he was able to get in touch with the owners of the home. It turns out that Luka’s family had just hit the road for their vacation, and Luka’s dog sitter was set to arrive any minute. John sat with Luka until his pet sitter arrived, unwilling to leave his side until he knew he was okay.

“I happened to be in the right moment at the right time. I would repeat the same actions over and over if I had to.” John Cassabria

After learning more about Luka and discovering that he was a 14-year-old senior with issues in his hind legs, John realized just how lucky it was that he stumbled upon the scene. Who knows what Luka’s fate would have been if the two hadn’t crossed paths.

“Words cannot express how grateful we are to him. In fact I have tears in my eyes as I write this email. Luka is doing fine thanks to your wonderful and courageous employee.” Luka’s Fur Mom

Once Luka’s pet sitter had arrived and he knew he was in good hands, John got back to work as usual. Word of John’s heroic act has spread around the country, even resulting in a touching announcement from Amazon themselves.

“We love hearing stories about drivers being everyday heroes. Everyone at Amazon was touched by John going above and beyond to save Luka’s life, and we’re excited to celebrate and thank him for his great efforts.” Amazon Spokesperson

It turns out that a bone wrapped up in the pool’s vacuum may have lured Luka into the deep end that day. No matter the cause of the incident, we are so thankful for John’s impressive bravery!

The post Amazon Driver Rescues Senior Husky From Near Drowning In Pool appeared first on iHeartDogs.com.